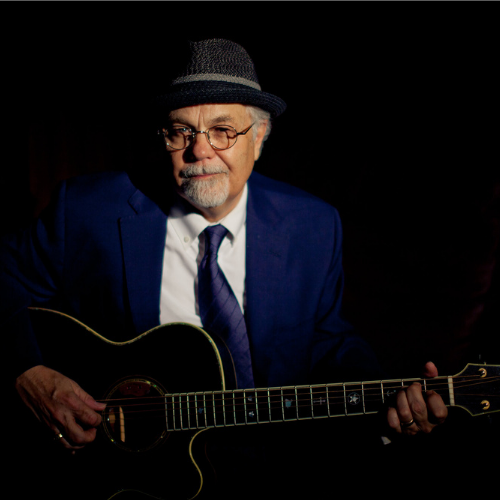 Despite his two Grammys and a slew of writing credits on chart-topping songs recorded by some of the world’s biggest artists, Gary Nicholson doesn’t regard himself as famous. In fact, he’s so humble, he apologizes sheepishly about putting a caller on hold to take another instead of letting it go to voicemail. But who wouldn’t pick up for Ringo Starr? Or Willie Nelson, Bonnie Raitt or Buddy Guy?

Even if he’s not a household name, Nicholson is one of Nashville’s most esteemed songwriters, producers and performers, with a credits list few others can match. His name appears on 600-some recorded songs spanning multiple genres, including the title track of Starr’s latest album, Give More Love; the title track of Guy’s new one, The Blues Is Alive and Well; the Merle Haggard tribute, “He Won’t Ever Be Gone,” on Nelson’s God’s Problem Child; and the first track of Keb’ Mo’s and Taj Mahal’s TajMo, 2018’s Best Contemporary Blues Album Grammy winner.

Nicholson’s Grammys represent two of the five Delbert McClinton albums he produced and co-wrote. With the late Stephen Bruton, he also co-wrote “Fallin’ and Flyin’,” the song Jeff Bridges sings in the Oscar-winning film Crazy Heart. But Nicholson occasionally tackles his own projects; his latest, a song and video titled “God Help America,” on Blue Corn Music, is particularly close to his heart.

Nicholson says he was inspired to write “God Help America” because he believes that God has blessed America, but we still have much to work to do as a nation, and he wanted to address our current schisms in a way that might help bridge the chasms.

He decided to record the song as a soulful duet featuring blues-gospel great (and three-time Grammy nominee) Ruthie Foster, a fellow Texas native. Then he commissioned a majestic video that depicts images of this American life, including reminders of what already makes this country great: the people and places we love, the activities we enjoy, the symbols we respect. The fabric of our lives, a richly woven tapestry we sometimes take for granted.

On the song, the accomplished guitarist gently strums his custom acoustic while pondering his “sweet, troubled home,” accompanied by Chris Carmichael’s strings, Joe Robinson’s gut-string guitar and multi-instrumentalist John Jorgenson’s fretless bass. Foster’s dynamic voice elegantly chimes in on the second verse, and together, they sing the third verse’s prayerful lyrics, God Help America live its ideal … Let the freedom that we stand for/Overcome all hate and greed. Nicholson’s voice first conveys ache, then takes on a reassuring, cathartic tone — one he hopes might ease some animosity and even inspire more tolerance as important mid-term elections loom.

Until a friend asked Nicholson what prompted him to recast the Great American Songbook classic, he says, he hadn’t realized “how much of my being had been taken over by what has happened in our country.”

Nicholson’s political awareness started early, though: when he was 11, his father, who’d campaigned for Sam Rayburn, took him to Washington, D.C., where the House speaker squired them around the halls of Congress. Nicholson also happened to reach draft age in 1968, a time he points to as the most politically divisive of his life — until now.

“I’ve witnessed some insanity through the years,” he says. “But today’s troubles are different, and I wasn’t hearing anybody singing about what’s on everybody’s mind every day, so I said, ‘Well, I’m just gonna put this out there.’”

Tracking at his own Fearless Recording studio in Nashville, with Zack Allen engineering and Ray Kennedy mixing, Nicholson and Jorgenson recorded a full album, The Great Divide, which he’ll release soon. Its songs encompass blues, folk, gospel, ragtime and, on one that marches from the Civil War era to now, a Celtic influence. A couple of them could have been rendered by Nicholson’s alter ego, “obscure bluesman” Whitey Johnson (one, “Blues in Black and White,” actually is part of Johnson’s repertoire).

But more about that when the time comes. For now, Nicholson offers “God Help America” as an attempt to repair some of the divisiveness fraying our nation at its seams.

“It’s overwhelming for all of us,” Nicholson says. “We need music to soothe our souls, as it did in the days when you had ‘For What It’s Worth’ from Buffalo Springfield or ‘What’s Going On’ from Marvin Gaye, and ‘Give Peace a Chance’ and ‘Revolution’ and all the Bob Dylan songs.”

During that tumultuous era, music also helped catalyze major change, as it has in many times of upheaval. “Music helped us get through all the madness a little easier,” Nicholson recalls, adding, “I’ve made a living writing songs; now I’m hoping to serve.”

Born in Commerce, Texas, and raised in the Dallas-Fort Worth area, Nicholson began making that living as a teen. Inspired by Elvis, Jerry Lee Lewis, Buddy Holly and other early rockers spinning on his older sister’s record player, he got a guitar at 10. That led to playing Beatles covers in several high-school bands, including underage gigging around the DFW scene that spawned Bruton, McClinton, T Bone Burnett and other talents. At one club, he alternated sets with a band featuring Jimmie Vaughan and his even more underage brother, Stevie, before they moved to Austin.

After entering North Texas State University (now the University of North Texas) in Denton, Nicholson wound up touring with Todd Rundgren’s old band, the Nazz. Back at school, Nicholson and his college bandmates got to meet the Flying Burrito Brothers and hang out with Gram Parsons, who suggested they head to L.A. So they did, and immediately won a talent contest at the famed Palomino, where they met Glen Campbell, Delaney Bramlett, James Burton, Clarence White, Linda Ronstadt and other hot talents. As Uncle Jim’s Music, they signed to an MCA imprint; college classmate Don Henley, who had migrated to L.A. with fellow student Jim Ed Norman, drummed on the demos that got them signed.

Nicholson returned to Texas in 1973, where he played with McClinton and his own band. Norman, meanwhile, became a producer in Nashville. Nicholson started sending him songs; Mickey Gilley cut “Jukebox Argument” for the Urban Cowboy 2 soundtrack. That drew Nicholson to Nashville, where he wrote for Norman’s publishing company and toured with Guy Clark and Billy Joe Shaver. After signing with Tree Publishing (now Sony/ATV) he got his first No. 1 with Don Williams’ recording of “That’s the Thing About Love.” A string of hits followed; he reached No. 1 again with Vince Gill’s version of their co-write, “One More Last Chance.” Nicholson’s songs also boosted the careers of Waylon Jennings, Charley Pride, Patty Loveless, Lee Roy Parnell, Montgomery Gentry, Garth Brooks, Trisha Yearwood, Reba McEntire, the Mavericks, John Prine and many others, and he began collaborations with McClinton and Starr that continue to this day.

The chameleonic Nicholson has also done several Songwriting With: Soldiers workshops and works with Project Peace on Earth, which promotes world peace through music. With Police drummer Stewart Copeland and other renowned jurors, Nicholson, a 2011 Texas Heritage Songwriters Hall of Fame inductee, selected the first Peace Song Award winners in 2016.

Nicholson’s entire career has been about finding common ground through music, so he obviously knows a little something about how people can overcome differences. With “God Help America,” he’s providing what might be just the nudge we need to remind us we’re still the United States. One nation